Greetings from my desk in Tokyo, Japan!

Summer is quickly approaching, and soon it will be raining cats and dogs here. Right now, though, it’s a sunny and balmy 80°

Life in Japan doesn’t seem to be much different from life in the US to me. Everything just feels normal. It isn’t until I take a moment to define what exactly I mean by “normal” that I start to see how different everything really is. We still have dinner, but it’s not often what we would consider “American”. Sometimes, it’s even cheaper to go to a restaurant than to go to the grocery store. We still motor around town to do errands and pick up kids, except now the only motor we own is a tiny one attached to Tracy’s “mamachari” (A bike made specifically for carting around loads of kids and groceries. The motor gives the mommas extra oomph. CLICK for more details.) We still have family birthday parties, except instead of our family back in the US we have an extended surrogate family in TEAM. 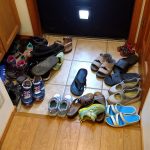 Speaking of family in the US, we still see them semi-regularly except now it is through a computer or phone screen instead of face-to-face. This all seems normal to me, and this speaks to the amazing work of God in our lives. Some changes are easier to accept than others. We regret much less the loss of a car (hardly at all, actually) compared with the distance between us and our family. But all things considered, life is going really well for us.

Ella is nearing the end of her school year. She has made a lot of friends and I’m sure will be quite devastated to say goodbye to some of them for the summer (a few are missionary kids going to the US on Home Assignment). Jemma gets a five week break over the summer, but she is enrolled in a Japanese school, and they go all year round. She has been a trooper, going to a school where she doesn’t understand the language, the commands, the quirks of a school and her classmates. She’s even started bringing new Japanese vocab home with her, which is really exciting for us to watch!

Tracy and I continue with language study, parsing our way through new vocab and verb conjugations. We are working on getting language partners in addition our tutors. We will be practicing with these helpers for 1-3 hours a week, honing our skills with simple conversations like, “This is a pen.” and “How much is this sushi?”. These are the kind of conversations that are difficult to have in the normal world, unless someone is confused on what a pen is, or is especially concerned that their cheap grocery store sushi might not be cheap enough (hint: it is). Slowly but surely we are creeping our way towards understanding.

This past week from Monday to Wednesday I was able to attend a TEAM Men’s Retreat. It was a great time of fellowship with men in the same boat as I am. There were a number of TEAM missionaries I hadn’t had the opportunity to meet yet, and it was quite encouraging to see and hear about the years of ministry represented there. The retreat took place in a little vacation town outside of Tokyo that TEAM has had a presence in for many, many years. It’s nestled in the mountains and had an abundance of trees, breezes, running streams, and hills to climb. It was a great time to find some space in nature to get away with God: a quiet place to just be with him. I was initially concerned that the three days would be more like a conference and less like a retreat, but it turned out I was blessedly wrong!

I am also beginning the paperwork process for bringing our dog over from New York. There have been more than a few nights where our girls have gone to sleep crying because they miss our wonderful pooch. Hopefully we won’t have too many more of those nights. We expect him to be here sometime at the end of June or early July, depending on what Japan’s Animal Quarantine Service says. 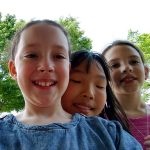 Ella and some of her friends on a field trip

One thing that has become clear to us in this environment where things are different but still familiar is that all of our sharp edges become more evident. All of the ways that we would normally cope with being grumpy, tired, hungry, and bored are not options anymore. This has been a challenge as we have had moments where we get on each others nerves. The girls especially have had their share of fights with us and with each other. This in turn brings out our own sharp edges in how we deal with them. And while it has been hard, it has also been a great blessing. Those things in ourselves that do not quite line up with Jesus are more clear to us. We can’t ignore them or cover them up as well as we could in the US. We have been forced to bring those things into the light mostly because we don’t know where the concealing shadows are anymore. Once revealed, these inconsistencies are glaring, and become so much easier to address. Hopefully, as time goes on we will grow accustomed to bringing things into the light instead of finding new ways to hide how we are not yet like Jesus.

Don’t forget to let us know how we can be praying for you! Love and miss you all 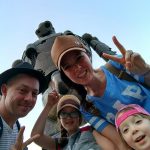 We found a robot! Ghibli Museum for Ella’s 9th birthday 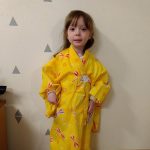 Jemma in a second-hand yukata 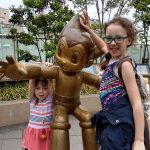 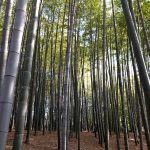 A bamboo forest just a short bike ride from our house