“Rice week” or “Finding what you really need” 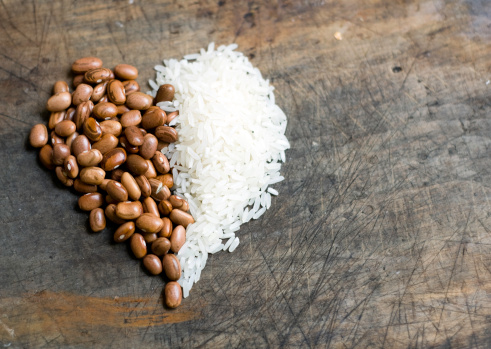 A few weeks back, we had an epiphany.

We had too much.

Too much food, too much stuff, too much to do, and far too much complaining. I’m sure just about every parent has said to their child “There are starving children in Africa that would LOVE to eat those brussel sprouts!” I’ll admit, I’ve heard it passed around our table in its various and sundry ways, and it usually meets with the same indifference as always because after all, we DO have things besides brussel sprouts and broccoli to eat, and no one really feels all that terribly about tossing a few unpleasant green vegetables in the garbage. This issue extends itself to so many other things in our lives from the clothes that we wear to the electronic gadgets we beep away all day on. And so often the idea of our indulgence contrasting with an anonymous sufferer half-way across the world falls flat. So we decided to put a face to our statement. Our face, to be exact.

For a whole week, we ate rice. Now, since you can’t leap to George Muller’s standards overnight we added a small list of items that we could have in addition. For dinner every night it was one piece of chicken (split four ways), and some mixed vegetables. To drink, water or tea. No dessert, no special treats. Lunch and breakfast had a similarly limited menu. TV usage dropped completely, two toys per girl were left to play with (besides crayons and books). Whining and complaining increased significantly.

But then something miraculous happened. After the second day, the whining subsided, and artwork overflowed our refrigerator. I stopped craving sugar (which is a miracle unto itself). Temper tantrums faded quickly, nightly walks increased, and we were happier people. Once the option for “more more more” went away, we were content with what we had. We found joy in the second bowl of rice, and writing crayon stories on recycled paper, and singing and dancing together. Suddenly, convincing a six year old to cram down all five elements of dinner seemed less important after all.

Now certainly there is poverty in the world, and it is awful and terrible and we should endeavor to address it whenever we can. During “rice week” we never really went hungry. We were never truly without, so in a very real way we have no idea what it is to be entirely destitute like so many in the world. In this way, “rice week” was a failure. But this one thing maybe we did learn. Perhaps, when compared to the American mantra of “never too much of a good thing,” the content life filled with limited choice might just be the more enviable lifestyle.